Stunning Glasswing Butterflies Have Wings That Look Like Transparent Windows 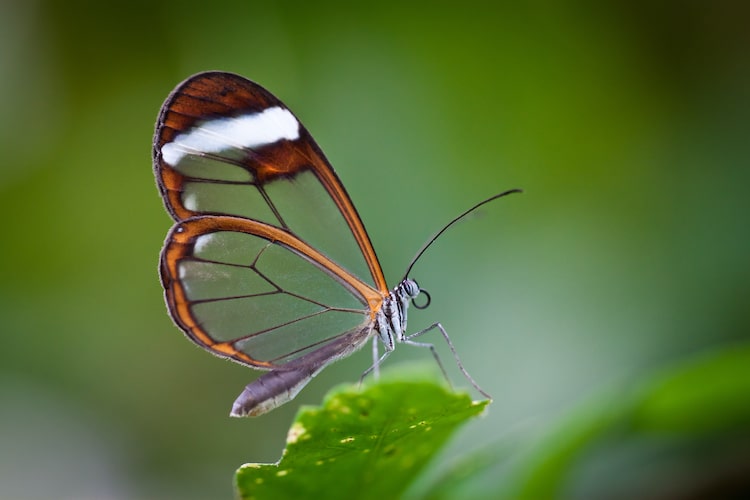 Stunning Glasswing Butterflies Have Wings That Look Like Transparent Windows

The glasswing butterfly (scientifically known as Greta oto) might be the most beautiful bug you have never heard of! Their delicate wings have a frame of orange and white colors similar to the monarch butterfly. However, the rest of their fancy wings are made of flawless clear panes that look like windows. A recent video from KQED provides a “Deep Look” at these special creatures. You will discover that their gorgeous wings serve two purposes: the white stripe warns predators of toxicity, and the clear panes allow the butterfly to disappear into its surrounding (making it almost invisible).

What makes these clear wing panes so special? From their early caterpillar stage, glasswing butterflies lack pigment in their chitin, a material in insect exoskeletons and butterfly wings. Without pigment, the wings are colorless and—because of their thinness—transparent. To further protect against predators, the wings are equipped with many tiny nanopillars (wax towers which form a rough texture upon microscopic inspection of a wing’s surface). A rough texture prevents the surface from being reflective, giving the illusion of almost “empty” panes.

These special insects are native to Central and South America; but like other butterfly species, they migrate seasonally, sometimes even appearing in Florida. They can travel at speeds up to eight miles per hour and are stronger than typical butterflies. Scientists have recognized how special this species is. According to Phys Org, the nanopillars of glasswing butterflies have inspired Caltech scientists to improve the functionality of eye implants.

Have you ever seen a glasswing butterfly?

These little marvels are feats of both beauty and nature’s masterful engineering!

Their wings look like transparent windows, rendering them as nearly invisible.

Take a closer look at glasswing butterfly in motion:

May 11, 2021 Your DailyDistraction
Art Humor Photography

May 15, 2021 Your DailyDistraction
Nature Photography Science