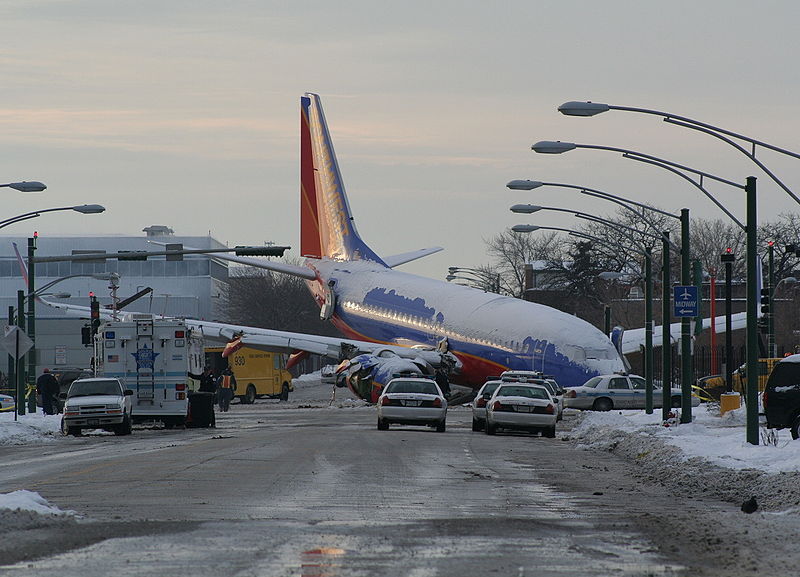 Southwest Airlines Flight 1248 (WN1248, SWA1248) was a scheduled passenger flight from Baltimore, Maryland, to Chicago, Illinois, to Salt Lake City, Utah, and then to Las Vegas, Nevada. On December 8, 2005, the airplane slid off a runway at Chicago-Midway while landing in a snowstorm and crashed into automobile traffic, killing a six-year-old boy.

This was ruled a crash due to a snowstorm and pilot error at the intersections of 55th Street and S Central Ave in Chicago Illinois.

The captain was 59-year-old Bruce Sutherland, who had been a former U.S. Air Force pilot. He joined Southwest Airlines in August 1995 and had 15,000 flight hours, including 4,500 hours on the Boeing 737. Neither pilot had been involved in an accident or incident before Flight 1248.

Now… why are there NO signs of the wreckage of a plane crash at the site of the Pentagon? If this plane crash-landed in Chicago, rather intact… what happened to the “plane” that stuck the building? Was it a plane? Footage mysteriously disappeared and these photos also show a lack of evidence it was a plane.

Ireland Baldwin’s Getting Out The Vote Chest-First